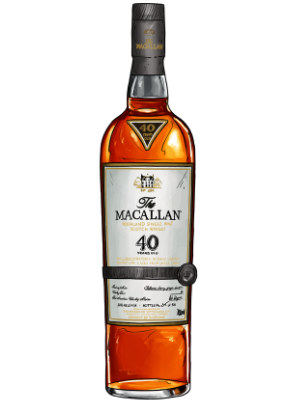 Become a cocktail expert
Explore unique, exciting spirits & cocktail recipes!
Thank you! Your submission has been received!
Oops! Something went wrong while submitting the form.

The rare and highly collectible special edition released in 2017 is a thing of beauty; only 465 bottles of The Macallan 40 Year Old were sold. The single malt represents the best of the distillery’s signature Sherry cask aged malts, aged for 40 years in European oak sherry butts, hogsheads, and American oak sherry butts, all infused with Oloroso Sherry.

An impressive nose, only found in malts with extended aging, opens with a rich core of dried fruits: sultanas, dates, bergamot, and caramelized figs. A second aromatic layer shows cinnamon, cedar, and cigar box. A mature expression of immense depth. You can stick your nose in your glass for hours.

Thick and coating, deep and complex, The Macallan 40 Year Old has a rich palate of unfolding flavors. Dried fruits dominate the flavor profile, and a spicy backbone adds complexity to an already layered mouthfeel.

Good luck finding this beauty, a once in a lifetime expression of depth and complexity. Only a few bottles were sold online for $6,100, but it’s totally worth hunting. Master Blender Bob Dalgarno separated the casks for The Macallan 40 Year Old from their last 30-year-old blend and aged them a decade more. The result is stunning, a mature dram to crown the most exquisite collection.

Other Macallan expressions to try

Any bottle in the Fine and Rare collection will give you a similar sense of pleasure, especially the ones with a similar age. The Macallan 1985, although only 29 years old, bottled in 2014, has a similar brown spirit profile of dark fruits and chocolate.

Become a cocktail expert
Explore unique, exciting spirits & cocktail recipes!
Thank you! Your submission has been received!
Oops! Something went wrong while submitting the form.